For Immediate Release
Office of the Press Secretary
December 4, 2002

THE PRESIDENT: Good morning. Thank you. Please be seated. Thank you for coming. Legislation I sign today will create a new place on the Internet that is safe for our children to learn and to play and to explore.

Dot Kids will be part of the U.S. country domain on the Internet. It will function much like the children's section of the library, where parents feel comfortable allowing their children to browse. Be a safe place for children to go. 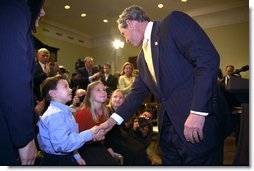 This bill is a wise and necessary step to safeguard our children while they use computers and discover the great possibilities of the Internet. Every site designated .kids will be a safe zone for children. The sites will be monitored for content, for safety, and all objectionable material will be removed.

Online chat rooms and instant messaging will be prohibited, unless they can be certified as safe. The websites under this new domain will not connect a child to other online sites outside the child-friendly zone.

I appreciate you all coming today. It's my honor now to sign the Dot Kids Implementation and Efficiency Act. Will the members join me.

Q Sir, can you tell me specifically what the inspectors have or haven't been able to do, what they've uncovered or what they haven't uncovered that leads you to believe the signs are not encouraging that they're doing their job?

THE PRESIDENT: Yes. Well, I can tell you this. This isn't about inspectors. The issue is whether Saddam Hussein will disarm. Will he disarm in the name of peace. And we expect him to fully comply. And one of my concerns is that in the past he has shot at our airplanes -- anybody who shoots at U.S. airplanes, or British airplanes, is not somebody who looks like he's interested in complying with disarmament.

He wrote letters, stinging rebukes to what the U.N. did. He was very critical of the U.S. and Britain. That doesn't appear to be somebody who was that anxious to comply.

But we've just started the process. And one of the things that I want to continue to remind Americans, this is not a game that we're playing of hide and seek. This is our attempt to work with the world community to create peace. And the best way for peace is for Mr. Saddam Hussein to disarm. It's up to him to make his decision.

Q Kofi Annan said Iraq is cooperating. Is there some daylight between you and --

THE PRESIDENT: We've been at this -- what -- five days. This is after 11 years of deceit and defiance. And the issue, again, is not hide and seek; the issue is whether or not Saddam Hussein will disarm. And soon he'll be making a declaration of whether he has any weapons. For years he said he didn't have any weapons. And now we'll see whether or not he does. And if he does, we expect them to be completed destroyed and a full accounting.

And I remind our citizens that the U.N. Security Council voted overwhelmingly, 15 to nothing, for this approach we've taken. Our NATO allies have joined us, and we all expect Saddam Hussein to disarm.

Q To follow on what Steve just asked you, do you disagree with the Secretary General's relatively optimistic take on things?

THE PRESIDENT: What I agree with is that we've been doing this for five days, after 11 years of deception and deceit. The process is just beginning. And the world will determine soon whether or not Saddam Hussein is going to do what we've asked, which is, in the name of peace, fully disarm.

This is not a game anymore of, well, I'll say one thing and do another. We expect him to disarm. And now it's up to him to do so. And time will tell whether or not he is willing to do so.

Q A 95-year-old woman was killed on the West Bank yesterday, and aid groups say that malnutrition among Palestinian children is reaching crisis proportions. What are you doing to alleviate that suffering? And are you concerned that the desperation of the Palestinian community is driving them into the arms of al Qaeda?

THE PRESIDENT: I am concerned that terrorists have disrupted the ability for peace-loving people to move a process forward. I am concerned about that. And our country will continue to fight terror and join our allies in fighting terror wherever it exists. And so I fully understand the Israeli government's attempt to stamp out terror, because we'll never have peace so long as terrorists are able to disrupt. I'm also concerned about the plight of the Palestinian people. I'm concerned about suffering that has taken place as a result of the activities of terrorists.

We're working with the Sharon government to allow for tax receipts to be redistributed amongst the Palestinian people. And there are a lot of non-governmental organizations doing work within the Palestinian Territory to make sure that people don't starve.

But the net effect of terrorism is to not only stop the peace process, but is to cause suffering amongst all the people of the region. And that's why our war against terror must -- must remain steadfast and strong, wherever terror exists.

THE PRESIDENT: No, that's fine, that's plenty. (Laughter.) You did a wonderful job. It was such a great question, I already forgot it. Next. (Laughter.)

Q Are you concerned about al Qaeda on the West Bank?

THE PRESIDENT: I am concerned about al Qaeda anywhere. I believe that al Qaeda was involved in the African bombings, in Kenya. I believe al Qaeda hates freedom. I believe al Qaeda will strike anywhere they can in order to disrupt a civil society. And that's why we're on the hunt. And we're making progress, slowly but surely we're dismantling the al Qaeda network.

It doesn't matter how long it takes to find them, we'll find them. And we're going to bring them to justice. And the good news is, is that the free world is -- recognizes the threats that we all face, and therefore, we're more bound together than we've ever been, in cutting off money, in sharing intelligence, and bringing people to justice.

And it's a dangerous world we live in, because there's still terrorists on the loose. And this is the great charge we have; this is the first war of the 21st century, and it's a different kind of war. It's a different kind of war than our fathers and grandfathers fought. It requires the same amount of courage and the same amount of focus. And this government will continue to provide that focus.

Q Sir, there's a report out today that shows a sharp deterioration in public attitudes abroad about this country, particularly among Muslim nations and key allies like Turkey and Pakistan. Are you concerned, sir, that your message that this is -- that the anti-terror campaign is not a war against Islam is somehow not getting to those people?

THE PRESIDENT: Well, I haven't seen the report. As you know, I remain skeptical about polls. I don't run my administration based upon polls and focus groups. I'm running this war against terror based upon freedom and doing my obligation to make sure our children can grow up in a free and safe society.

I hope the message that we fight not a religion, but a group of fanatics which have hijacked a religion is getting through. I understand the propaganda machines are cranked up in the international community that paints our country in a bad light. We'll do everything we can to remind people that we've never been a nation of conquerors; we're a nation of liberators. And I would ask the skeptics to look at Afghanistan, where not only this country rout the Taliban, which was one of the most barbaric regimes in the history of mankind, but thanks to our strength and our compassion, many young girls now go to school for the first time.

The Muslim world will eventually realize, if they don't now, that we believe in freedom, and we respect all individuals -- unlike the killers, we value each life in America. Everybody is precious. Everybody counts.

And to the extent that we need to continue to make that message work, we will try to do so. But the best thing we can do is to show results from our activities, and be able to point to the fact that not only did we liberate Afghanistan from the Taliban, we remain in place, with a lot of aid and a lot of help. And the suffering of the human condition is improving, and suffering is less because of the United States of America.

Thank you all. Thanks for coming. (Applause.)