For Immediate Release
Office of the Press Secretary
December 2, 2002

Thank you, Mr. Secretary. And thank you for your leadership. Thank you for your candor. Thank you -- you're doing a fabulous job on behalf of the American people. It's an honor for me to be here today with the leaders of our military, the good folks who are serving our country, to sign the 2003 Defense Authorization bill. 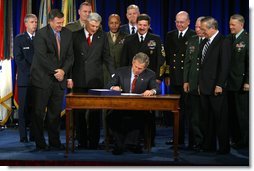 We're a nation at war. America must understand we're at war. But those who wear the uniform must understand how proud all of America is for your service to our great country. On behalf of a grateful nation, I'm here to thank you.

Our military is making good progress in this war. We've liberated an oppressed and friendless people. We're hunting down the terrorists all across the globe. We're performing our missions with speed and skill. You have the strong, united support of this great land. And this bill should reflect the strong and united support of the United States Congress.

I appreciate so very much all those who work in the Secretary's office who worked hard on this bill. I want to thank the Chairmen of the Joint Chiefs who are here, and the Vice Chairmen are with us, and those who represent the enlisted personnel of our military.

Most of all, I want to say a word about Bob Stump. Chairman Stump, who couldn't be with us today, distinguished Chairman of the Armed Services Committee, who has served our nation well. He's a dedicated public servant who has decided to retire. And as the Secretary said, this bill is appropriately named for this fine American. We will miss him, and we wish Bob and his family all the very best.

The legislation I sign this afternoon was passed by Congress in a remarkable spirit of unity. It sets priorities of our Defense Department in a critical, critical period for our country. Our country has unprecedented challenges, and we're facing them with unmatched technology, careful planning and the finest traditions of valor.

We're rewarding the service and sacrifice of our military families with higher pay, improved facilities and better housing. We're procuring the best weapons we possibly can and the best equipment, while adding funds for operations and maintenance, as well. We're investing in missile defenses and all new technologies we need to gain every advantage -- every advantage -- in the battlefields of the future.

And since intelligence is playing a critical role in our ability to achieve military victory, this new law creates a new high-level position within the Department of Defense called the Under Secretary for Intelligence.

This generation of Armed Forces has been given two difficult tasks, fighting and winning a war; and at the same time, transforming our military to win the new kind of war. In the first stages of our fight against terror, we've already seen the future face of warfare, forces that are more agile and mobile and lethal -- along with weapons that are smarter and tactics that are more inventive. These priorities are reflected in this year's budget. You'll see them reflected in every military budget I submit and sign as your President.

America's military is strong. And that's the way it should be. Our nation and the world are safer that way. Now and in the future, we will maintain a military that is second to none. And the greatest strength of America's military is the cause we all serve. That cause is freedom in a world at peace. Today that cause is being challenged by determined enemies. And we will not rest and we will not relent until our freedom is secure.

Our troops in Afghanistan remain engaged in a difficult and dangerous mission. We're hunting down trained killers. And that's all they are -- nothing but a bunch of cold-blooded killers. We're destroying their weapons. The Secretary reports to me in the White House that day after day, we're finding giant caches of weapons which we're destroying. And while we hunt them down -- hunt the killers down, we'll continue to help the Afghan people, as they work to build lives of dignity and lives of security. Afghanistan is no longer a safe haven for hijackers and bomb-makers and assassins. Thanks to the United States military, the terrorist training camps are closed. Many terrorists have met their fate in the caves and mountains of Afghanistan. Others are now in custody.

Yet we know that many terrorists are still at large. They hide and they plot in over 60 different countries. We face an enemy that's attacked cities in America, embassies and airplanes in Africa, ships in the Gulf, tourists in Bali. This enemy lives like a parasite. They plot in shadows. They prey on failed states. And they ally themselves with outlawed regimes.

Defeating this enemy requires fighting a different kind of war, what we call the first war of the 21st century. We're pursuing the terrorists wherever they dwell. It doesn't matter where they -- where they hide, we're after them, one by one. We follow them wherever they run. They think they can run; they can't run far enough from the long arm of justice of the United States. We're freezing their finances. We're disrupting their plots. We're killing them or capturing them, one person at a time. That's how you win the first war of the 21st century -- a war we are going to win. (Applause.)

Some of the successes in this war will make headlines, and sometimes you won't even know about it. But all the terrorists can be certain of this: Their hour of justice will come. And that hour has already arrived for an increasing number of field generals of the terrorist army. Recently, we took a guy named al Nashiri into custody. Until last month he was the top al Qaeda operative, the top al Qaeda leader in the Gulf region. He was plotting and planning. But today this much is certain -- he won't be executing any more attacks against the United States and our friends like the attack he mastermind against the USS Cole.

Success in the war on terror will only come by taking every measure to protect innocent people from sudden and catastrophic violence. And we must oppose the threat of such violence from any source. We oppose the terror network and all who harbor and support the terrorists. And we oppose a uniquely dangerous regime that possesses the weapons of mass murder, has used those weapons, and could supply those weapons to terrorist networks.

As the U.N. weapons inspections process gets underway, we must remember that inspections will not -- will only work -- will only work if Iraq fully complies. You see, the inspectors are not in Iraq to play hide and seek with Mr. Saddam Hussein. Inspectors do not have the duty or the ability to uncover terrible weapons hidden in a vast country. The responsibility of inspectors is simply to confirm the evidence of voluntary and total disarmament. It is Saddam Hussein who has the responsibility to provide that evidence as directed, and in full. Any act of delay, deception, or defiance will prove that Saddam Hussein has not adopted the path of compliance and has rejected the path of peace.

In the inspections process, the United States will be making one judgment: Has Saddam Hussein changed his behavior of the last 11 years? Has he decided to cooperate willingly and comply completely, or has he not? So far the signs are not encouraging. A regime that fires upon American and British pilots is not taking the path of compliance. A regime that sends letters filled with protests and falsehoods is not taking the path of compliance.

On or before the 8th of December, Iraq must provide a full and accurate declaration of its weapons of mass destruction and ballistic missile programs. That declaration must be credible and complete, or the Iraqi dictator will have demonstrated to the world once again that he has chosen not to change his behavior.

Americans seek peace in this world. We're a peaceful nation. War is the last option for confronting threats. Yet the temporary peace of denial and looking away from danger would only be a prelude to broader war and greater horror. America will confront gathering dangers early, before our options become limited and desperate. By showing our resolve today, we are building a future of peace.

In the decisions and missions to come, our military will carry the values of America and the hopes of the world. The people of Iraq, like all human beings, deserve their freedom. And the people of Afghanistan -- with the help of the United States Armed Forces -- have gained their freedom.

One guardsman from Florida tells of meeting a member of the new Afghan national army. This Afghan soldier said he enlisted to honor the memory of this brother who was killed by the Taliban, and to ensure that his own son would live in freedom. The Florida guardsman wrote home that "being here makes me realize that people are giving up their lives to have a fraction of the freedoms we take for granted." He said taking -- "talking to one soldier made me realize how lucky I am to have been born in the United States of America."

"I'm honored to have met an Afghan patriot," he wrote. Every time I visit this building or any American base around the world, I'm honored to meet American patriots. The men and women of our military bring credit to our flag and security to our country. On behalf of the American people I thank you for all you've done, for all you will do in the cause of freedom and the cause of peace.