For Immediate Release
Office of the Press Secretary
November 27, 2002

THE PRESIDENT: Thank you, all, for coming. Please be seated. Today, I sign an act of Congress authorizing intelligence programs vital to our security, and creating a national commission to investigate the events of September the 11th, 2001, and the years that led up to that event. This commission will help me and future Presidents to understand the methods of America's enemies and the nature of the threats we face. 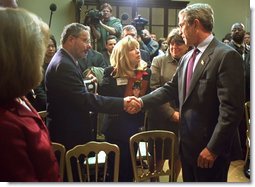 Today, I'm pleased to announce my choice for commission chairman, Dr. Henry Kissinger. Dr. Kissinger is one of our nation's most accomplished and respected public servants. He worked here at the White House as National Security Advisor, represented America abroad as the Secretary of State for two Presidents. He is a distinguished author, academic, Army veteran, and winner of the Nobel Peace Prize. He's also spent much of his life in New York, feels deeply the loss that came to that city and to our country. Dr. Kissinger will bring broad experience, clear thinking, and careful judgment to this important task.

Mr. Secretary, thank you for returning to the service of your nation.

Dr. Kissinger and I share the same commitments. His investigation should carefully examine all the evidence and follow all the fact, wherever they lead. We must uncover every detail and learn every lesson of September the 11th. My administration will continue to act on the lessons we've learned so far to better protect the people of this country. It's our most solemn duty.

I want to thank the congressional leaders for their work on this commission and on the broader legislation, as well. The law I sign today directs new funds and new focus to the task of collecting vital intelligence on terrorist threats and on weapons of mass production -- weapons proliferation. In a period of rapidly changing dangers, we will continue to work with the Congress to get the resources we need to gather information so we can better defend America.

I want to thank the members of Congress who are with us today, who worked hard to make this commission a reality: Senator Joe Lieberman -- thank you, Senator. Congressman Porter Goss; Tim Roemer; Chris Shays; and Chris Smith -- all distinguished members of the United States Congress. All who join thousands of Americans who refuse to forget that which took place on September the 11th, 2001.

Above all, I want to thank the family members of the people who were killed on September the 11th -- family members who are here today and others around the country. In working for this commission, you have been motivated by a noble goal: you want to spare other Americans the kind of suffering you faced. I appreciate that sentiment. America is grateful.

September the 11th marked a dividing line in the life of our nation. The events of a single morning dramatically demonstrated America's vulnerability to the threats of a new era. Oceans that separated us from other continents no longer separate us from danger. America's enemies are still determined to inflict great harm. We have a duty -- a solemn duty -- to do everything we can to protect this country.

We've acted to reduce the nation's vulnerabilities. We're stepping up security and transportation systems at port of entries and on our borders. We've made important reforms in federal law enforcement, ensuring that the FBI's primary focus now is the prevention of future attack. We're doing a better job of sharing information among agencies. By legislation I signed this week, we've created a Department of Homeland Security to involve the largest reorganization of the federal government in more than a half a century, with the goal of protecting America.

And overseas we're chasing the killers down one person at a time. One at a time. Slowly but surely, we're dismantling the al Qaeda network. There is no cave dark enough or deep enough to hide from the justice of the United States of America. And it doesn't matter how long it takes, this nation will stay on course to find them, to bring them to justice, to make sure America's homeland is secure.

These essential steps do not complete our work. And that's important for America to know. In the war against terror our goal is to take every measure that is necessary, to gather all information that is available and gain every advantage that is possible. An aggressive investigation into September the 11th, with a responsible concern for sensitive information that will allow us to win the war on terror will contribute to the security of this country.

This commission's findings may show a need for further reform in intelligence gathering and other areas. I'm confident that under Dr. Kissinger's leadership the commission's work will be thorough. The recommendations will be helpful and useful.

I also hope that the commission will act quickly and issue its report prior to the 18-month deadline embodied in the legislation. After all, if there's changes that need to be made, we need to know them as soon as possible, for the security of our country. The sooner we have the commission's conclusions, the sooner this administration will act on them.

And as a people, Americans are always looking forward. As a nation, we're working every day to build a future that is peaceful and secure. To reach this goal we must learn all about the past that we can. So with this commission we have formed today, America will learn more about the evil that was done to us. And the understanding we will gain will serve us for years to come.

I ask the members of Congress that are here today to please come up and join me as I sign this important legislation.