For Immediate Release
Office of the Press Secretary
November 25, 2002

THE PRESIDENT: Thanks for coming. Thanks for the warm welcome, and welcome to the White House.

Today, we are taking historic action to defend the United States and protect our citizens against the dangers of a new era. With my signature, this act of Congress will create a new Department of Homeland Security, ensuring that our efforts to defend this country are comprehensive and united. 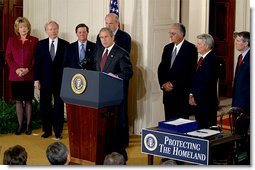 The new department will analyze threats, will guard our borders and airports, protect our critical infrastructure, and coordinate the response of our nation for future emergencies. The Department of Homeland Security will focus the full resources of the American government on the safety of the American people. This essential reform was carefully considered by Congress and enacted with strong bipartisan majorities.

I want to thank Tom Ridge, the Homeland Security Advisor, for his hard work on this initiative. I want to thank all the members of my Cabinet who are here for their work. I want to thank the members of Congress who are with us today, particularly those members of Congress who were essential to the passage, many of whom stand up here on the stage with me. One member not with us is our mutual friend from Texas, Phil Gramm. I appreciate his hard work. I thank the work of Senator Fred Thompson and Senator Joe Lieberman. I appreciate Zell Miller and Don Nickles' hard work as well. We've got a lot of members from the House here and I want to thank you all for coming. I particularly want to pay homage to Dick Armey, who shepherded the bill to the floor of the House of Representatives. I'll miss him -- I'm not so sure everybody will. (Laughter and applause.)

I thank Tom DeLay for making sure the bill got passed. I thank Rob Portman for his hard work. And I want to thank Ellen Tauscher as well for her leadership on this issue.

I appreciate Kay James of the Office of Personnel Management who worked so hard to make sure this effort was understood by everybody in our government, and I want to thank the other administration officials who are here, many of whom are going to be responsible for seeing to it this new department functions well.

I want to thank all the local and state officials who are here with us today. I see governors and county judges, mayors for coming. My own mayor -- the Mayor of Washington, D.C., I appreciate you coming, Mr. Mayor.

I want to thank the local and state law enforcement officials who are here, the chiefs of police and fire chiefs who are with us today. I see the chief of my city now is here as well. Thank you, Mr. Chief, for coming.

From the morning of September the 11th, 2001, to this hour, America has been engaged in an unprecedented effort to defend our freedom and our security. We're fighting a war against terror with all our resources, and we're determined to win.

We recognize our greatest security is found in the relentless pursuit of these cold-blooded killers. Yet, because terrorists are targeting America, the front of the new war is here in America. Our life changed and changed in dramatic fashion on September the 11th, 2001.

In the last 14 months, every level of our government has taken steps to be better prepared against a terrorist attack. We understand the nature of the enemy. We understand they hate us because of what we love. We're doing everything we can to enhance security at our airports and power plants and border crossings. We've deployed detection equipment to look for weapons of mass destruction. We've given law enforcement better tools to detect and disrupt terrorist cells which might be hiding in our own country.

And through separate legislation I signed earlier today, we will strengthen security at our nation's 361 seaports, adding port security agents, requiring ships to provide more information about the cargo, crew and passengers they carry. And I want to thank the members of Congress for working hard on this important piece of legislation as well.

The Homeland Security Act of 2002 takes the next critical steps in defending our country. The continuing threat of terrorism, the threat of mass murder on our own soil will be met with a unified, effective response.

Dozens of agencies charged with homeland security will now be located within one Cabinet department with the mandate and legal authority to protect our people. America will be better able to respond to any future attacks, to reduce our vulnerability and, most important, prevent the terrorists from taking innocent American lives.

The Department of Homeland Security will have nearly 170,000 employees, dedicated professionals who will wake up each morning with the overriding duty of protecting their fellow citizens. As federal workers, they have rights, and those rights will be fully protected. And I'm grateful that the Congress listened to my concerns and retained the authority of the President to put the right people in the right place at the right time in the defense of our country.

I've great confidence in the men and women who will serve in this department and in the man I've asked to lead it. As I prepare to sign this bill into law, I am pleased to announce that I will nominate Governor Tom Ridge as our nation's first Secretary of Homeland Security. (Applause.)

Americans know Tom as an experienced public servant and as the leader of our homeland security efforts since last year. Tom accepted that assignment in urgent circumstances, resigning as the governor of Pennsylvania to organize the White House Office of Homeland Security and to develop a comprehensive strategy to protect the American people. He's done a superb job. He's the right man for this new and great responsibility. (Applause.)

We're going to put together a fine team to work with Tom. The Secretary of the Navy, Gordon England, will be nominated for the post of Deputy Secretary. (Applause.)

And Asa Hutchinson of Arkansas, now the Administrator of the Drug Enforcement Administration, will be nominated to serve as Under Secretary for Border and Transportation Security. (Applause.)

The Secretary-designate and his team have an immense task ahead of them. Setting up the Department of Homeland Security will involve the most extensive reorganization of the federal government since Harry Truman signed the National Security Act. To succeed in their mission, leaders of the new department must change the culture of many diverse agencies -- directing all of them toward the principal objective of protecting the American people. The effort will take time, and focus, and steady resolve. It will also require full support from both the administration and the Congress. Adjustments will be needed along the way. Yet this is pressing business, and the hard work of building a new department begins today.

When the Department of Homeland Security is fully operational, it will enhance the safety of our people in very practical ways.

First, this new department will analyze intelligence information on terror threats collected by the CIA, the FBI, the National Security Agency and others. The department will match this intelligence against the nation's vulnerabilities -- and work with other agencies, and the private sector, and state and local governments to harden America's defenses against terror.

Second, the department will gather and focus all our efforts to face the challenge of cyberterrorism, and the even worse danger of nuclear, chemical, and biological terrorism. This department will be charged with encouraging research on new technologies that can detect these threats in time to prevent an attack.

Third, state and local governments will be able to turn for help and information to one federal domestic security agency, instead of more than 20 agencies that currently divide these responsibilities. This will help our local governments work in concert with the federal government for the sake of all the people of America.

Fourth, the new department will bring together the agencies responsible for border, coastline, and transportation security. There will be a coordinated effort to safeguard our transportation systems and to secure the border so that we're better able to protect our citizens and welcome our friends.

Fifth, the department will work with state and local officials to prepare our response to any future terrorist attack that may come. We have found that the first hours and even the first minutes after the attack can be crucial in saving lives, and our first responders need the carefully planned and drilled strategies that will make their work effective.

The Department of Homeland Security will also end a great deal of duplication and overlapping responsibilities. Our objective is to spend less on administrators in offices and more on working agents in the field -- less on overhead and more on protecting our neighborhoods and borders and waters and skies from terrorists.

With a vast nation to defend, we can neither predict nor prevent every conceivable attack. And in a free and open society, no department of government can completely guarantee our safety against ruthless killers, who move and plot in shadows. Yet our government will take every possible measure to safeguard our country and our people.

We're fighting a new kind of war against determined enemies. And public servants long into the future will bear the responsibility to defend Americans against terror. This administration and this Congress have the duty of putting that system into place. We will fulfill that duty. With the Homeland Security Act, we're doing everything we can to protect America. We're showing the resolve of this great nation to defend our freedom, our security and our way of life.

It's now my privilege to sign the Homeland Security Act of 2002. (Applause.)