For Immediate Release
Office of the Press Secretary
November 23, 2002

Alliance of Freedom Being Tested by "New and Terrible Dangers"
Remarks by the President to the Citizens of Vilnius
Rotuse
Vilnius, Lithuania 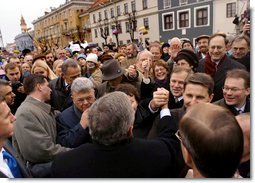 Many doubted that freedom would come to this country, but the United States always recognized an independent Lithuania. (Applause.) We knew that this continent would not remain divided. We knew that arbitrary lines drawn by dictators would be erased, and those lines are now gone. No more Munichs. No more Yaltas. The long night of fear, uncertainty and loneliness is over. You're joining the strong and growing family of NATO. Our Alliance has made a solemn pledge of protection, and anyone who would choose Lithuania as an enemy has also made an enemy of the United States of America. (Applause.) In the face of aggression, the brave people of Lithuania, Latvia and Estonia will never again stand alone.

THE PRESIDENT: You're welcome. (Laughter.) You are needed in the Nato Alliance. You will contribute to our common security. Yet the strength of NATO does not only depend on the might of armies, but on the character of men and women.

We must be willing to stand in the face of evil, to have the courage to always face danger. The people of the Baltic states have shown these qualities to the world. You have known cruel oppression and withstood it. You were held captive by an empire and you outlived it. And because you have paid its cost you know the value of human freedom.

Lithuania today is true to its best traditions of democracy and tolerance and religious liberty, and you have earned the respect of my nation and all nations. (Applause.) 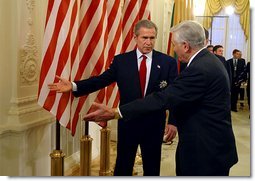 Over a decade ago hundreds of thousands of Lithuanians, Latvians and Estonians joined hands, from Talin to Vilnius, to show your love for freedom. Near Cathedral Square is a stone commemorating that struggle. Inscribed on that stone is one word: Miracle. The recent history of the Baltic states truly is a miracle. You've gained your freedom; you have won your independence. You now join a great Alliance, and your miracle goes on.

Today on this great day, may God bless the memory of Lithuanian patriots and freedom fighters who did not live to see this moment. And may God always bless the brave and the free people of Lithuania. (Applause.)

Thank you for coming today. May God bless freedom. (Applause.) 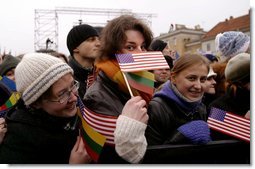