For Immediate Release
Office of the Press Secretary
November 20, 2002

PRESIDENT HAVEL: I am very grateful to President Bush for coming to the present NATO summit one day earlier in order to pay some kind of a working visit to the Czech Republic. He is the third President of the United States who has come to visit us in the 13 years since the collapse of the Iron Curtain, and I believe that this is a telling feature of the quality of our relationship. 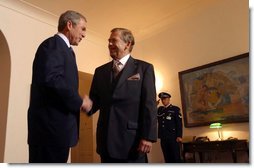 In our first conversation that has just ended, we have touched upon several issues, although, of course, not on all the issues that we would like to discuss. President Bush explained the position of the United States on Iraq, and I made it clear that I believe that if this issue is discussed within the NATO deliberations, as it obviously will be, that I would deem it desirable if the outcome of this discussion was reflected in some way in the final documents.

We also raised the subject of transformation of the North Atlantic Alliance, and I believe that there was full agreement between us on this matter.

I have made every effort to extend a truly cordial welcome to President Bush, and I will extend an equally cordial reception to all of the prominent guests coming for this summit. Perhaps the heart that is now shining above Prague Castle may represent a sign of this cordiality with which the Czech Republic, and me, personally, receive for the distinguished guests coming to the summit meeting.

PRESIDENT BUSH: Mr. President, thank you for your hospitality. I want to thank you and I want to thank the Czech people for welcoming not only me and our delegation, but welcoming many of the leaders of the world to a city which is recovering from devastating floods. The fact that you were able to host us in such fine fashion speaks to the great character of the Czech people.

The people of the Czech Republic must understand that your President is greatly admired in America. I'm proud to call you friend.

Before I make a few comments, I do want to say something for domestic consumption, if that's all right with you. Yesterday, the United States Senate voted overwhelmingly to better protect America, and voted overwhelmingly to help people find work. And I want to thank the members of the United States Senate for working with this administration to do the right thing for the American people. 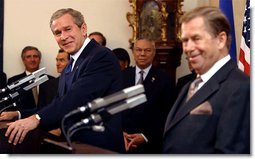 We did talk about Iraq. There is universal recognition that Saddam Hussein is a threat to world peace. There's clear understanding that he must disarm in the name of peace. We hope he chooses to do so. Tomorrow we'll discuss the issue. We'll consider what happens if he chooses not to disarm. But one thing is certain; he'll be disarmed, one way or the other, in the name of peace.

We also talked about NATO capabilities. We recognize it's a hard task to change the military strategy of this important Alliance. As I explained to the President, I've tried eliminating some weapon systems in the United States; it is a difficult job. But it is a necessary job to transform our strategy, our military strategy to meet the true threats we face. The enemy is not Russia; the enemy is global terrorists who hate freedom. And together we can work to defeat that enemy, in the name of freedom.

President Bush, you have said some lofty words here. The Czech Republic --

PRESIDENT BUSH: I said some what?

PRESIDENT BUSH: No one has ever accused me of being a poet before, but thank you. (Laughter.)

Q The Czech Republic has been a member of NATO for three years now. For three years we have been an ally of the United States. Are we, to your mind, a good ally, and do you count on us in a war with Iraq?

And the question for President Havel, 12 years ago you met in these halls with the father of the President of the United States, President George Bush, the elder. Now you are meeting with his son. The situation both in the Czech Republic and in the United States has changed fairly substantially in those 12 years. Have the relations within the two countries changed, as well?

PRESIDENT BUSH: Well, first, the Czech Republic is not only a good ally, it's a great ally. I can say that with confidence because I have heard the President speak about this country's commitment to freedom and peace. And the first test of that friendship came right after September the 11th. The world for our country changed on September the 11th, and the Czech Republic responded quickly.

Secondly, as to Iraq, it's very important for our nations, as well as all free nations, to work collectively to see to it that Saddam Hussein disarms. If the collective will of the world is strong, we can achieve disarmament peacefully. However, should he choose not to disarm, the United States will lead a coalition of the willing to disarm him. And at that point in time, all our nations -- we will consult with our friends and all nations will be able to choose whether or not they want to participate.

PRESIDENT HAVEL: President Bush, the elder, and I met during very dramatic times, and we have forged a lasting bond of friendship. In fact, I twice visited him at Kennebunkport after he left office. And I trust that after I leave office, which will be quite soon, my friendship with George Bush, the younger, will continue just as well.

As for the relationship between our two states, I believe that they have not only been gradually improved and have grown stronger, but they have developed into something that is actually taken for granted now, especially by the younger generation. And I believe that we do share a great deal of mutual confidence, indeed.

Q Mr. President, you just talked about the collective will of the world, and I'm wondering -- you said you hope NATO comes along --

PRESIDENT BUSH: You hope what?

Q You said that you hope NATO comes along with you and Saddam Hussein will disarm one way or another. And yet, I don't hear any discussion about NATO collectively taking up arms against Iraq should war be necessary. Why is that? Why settle for just niche contributions from individual allies? And also, what role do you see Germany --

PRESIDENT BUSH: What will I see --

Q What role do you see Germany taking in a war against Iraq?

PRESIDENT BUSH: Well, first, thank you for the "if we should go to war against Iraq." War is my last choice, my last option. I hope we can do this peacefully.

Now, you asked about two different parts of NATO -- first, by niche I mean that in order for there to be an effective NATO, some countries can specialize and provide excellence. And the classic example is the Czech Republic's ability to deal with biological weapons, the aftermath of a biological weapon attack.

The Czech Republic is one of the very best in the world at a chemical and biological response capability. And that's what I was referring to when I talk about the capacity of each country to contribute a part of an effective strategy, a military strategy, as we head into the 21st century, as a vision which is yet to be implemented, which is a vision which will be discussed here in Prague.

Of course, the key reason we're here is to talk about NATO expansion and the benefits of NATO expansion, not only to encourage the spread of freedom in Europe, but also to be able to deal with the true threats we face in order to defend our freedoms. And my answer, as far as Iraq goes, is exactly what I've said previously: If the decision is made to use military force, we will consult with our friends, and we hope that our friends will join us.

And a question for President Havel. Do you think that a clear commitment to take an action against Iraq will be expressed at this NATO summit? And will you support such as that?

PRESIDENT BUSH: Well, first, I think our NATO partners should expect a continued positive and active presence in this most importance alliance from the United States. Our country is committed to NATO. A strong and vibrant NATO is in the best interest of America, so we'll be active and good partners.

And the people of the Czech Republic should understand that the threat from global terrorists is real. These people hate freedom. They are cold-blooded killers who will take innocent life in the name of a hijacked religion.

Ours is a war not against a religion, not against the Muslim faith. But ours is a war against individuals who absolutely hate what America stands for, and hate the freedom of the Czech Republic. And therefore, we must work together to defend ourselves. And by remaining strong and united and tough, we'll prevail.

PRESIDENT HAVEL: I share the opinion of President Bush, and of all reasonable people, that it would be better to achieve Iraq's disarmament without using force. If, however, the need to use force does arise, I believe that NATO should give an honest and speedy consideration to its engagement as an alliance.

Let us realize that it is not the United States, but the European part of the alliance, that directly borders on that country, and I believe that this kind of a test of its attitude, of its capability to reach agreement, and of it's operative capabilities might be, at the same time, a test of its new identity, and of its meaning in the world of today.

Q Mr. President, you've said that you have a zero tolerance attitude toward Iraqi violations. Secretary Rumsfeld and Kofi Annan say they're looking for a pattern of behavior over time. Which is right? How do you reconcile these two?

PRESIDENT BUSH: Well, I think there is -- we were talking about whether or not Saddam Hussein shooting at our airplanes, what that means -- we'll deal with that. The United States will take appropriate action.

See, what happens is people tend to focus on the inspectors as if the inspectors are the end. The final -- the thing that's important, the final point of determination is whether or not he is disarmed.

So, what we're going to be looking for, and I hope the world joins us, is whether or not this man is cooperating with the will of the world. See, the world has recognized -- many members of NATO have recognized that a Saddam Hussein and Iraq which possesses weapons of mass destruction is dangerous. Imagine a Saddam Hussein with a nuclear weapon. It's important for the Czech people to understand this is guy who has poisoned his own people. He's got such hate in his heart he's willing to use a weapon of mass destruction not only on his neighborhood, but on the people of his country.

The United Nations has said 16 different times, "You must disarm." And 16 times, he's said, oh, of course, I will -- but never did. And so, the game's over with; we're through with that. And now he's going to disarm, one way or the other. In the name of peace, he will be disarmed.