For Immediate Release
Office of the Press Secretary
November 13, 2002 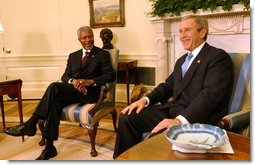 I'm looking forward to our discussion. Of course I'll remind the Secretary General that our war against terror is a war against individuals whose hearts are full of hate. We do not fight a religion. As a matter of fact, by far, the vast majority of American citizens respect the Islamic people and the Muslim faith. After all, there are millions of peaceful-loving Muslim Americans.

Some of the comments that have been uttered about Islam do not reflect the sentiments of my government or the sentiments of most Americans. Islam, as practiced by the vast majority of people, is a peaceful religion, a religion that respects others. Ours is a country based upon tolerance, Mr. Secretary General, and we respect the faith and we welcome people of all faiths in America. And we're not going to let the war on terror or terrorists cause us to change our values.

And so, Mr. Secretary General, I'm honored that you're here at the Oval Office. I'm proud to call you friend, and welcome.

THE SECRETARY GENERAL: Thank you very much, Mr. President. If I may comment on the last point you raised. I share your view entirely that every region and people of every faith have also been victims of terrorists. This is a scourge that affects all of us, regardless of region or religion. And we need to stand together to defeat terrorism.

And this is where the work of the United Nations and effective implementation of this Resolution 1373 is absolutely crucial. We need to work to deprive terrorists of the opportunities by not giving them haven, by not giving them financial and logistical support. And I think the counterterrorism committee of the Security Council is doing a good job in trying to make sure we all work together on it.

With regards to the Iraq decision, I want to thank you, Mr. President, for working with the United Nations and the Council and working through the Council. And I remember when you came to the U.N. on the 12th of September, nobody knew which way you were going to go. And in my own speech before yours, I was pleading that we go the multilateral route. And I think we were all relieved that we did -- you did.

And I would want to say that the Council decision, which was unanimous, sent a powerful message that the entire international community would like to see the Security Council resolutions implemented.

Today I received a letter from the Iraqi government accepting the resolution, saying that they would work with the resolution. And Mr. Blix and his team will go back. We expect them to get there on the 18th and actively begin their work. This is a Chapter 7 resolution, and it must be implemented.