For Immediate Release
Office of the Press Secretary
November 13, 2002

We talked about making sure that we lead, particularly when it comes to being wise with the taxpayer's money. We have a responsibility to spend people's money wisely. And so we had a little budget session here, to make sure that as we come back to deal with the '03 budget, as well as the '04 budget, that we do so in a way that resists the temptation in Washington to overspend. We feel strongly that we can meet our nation's priorities and be wise with the people's money at the same time. 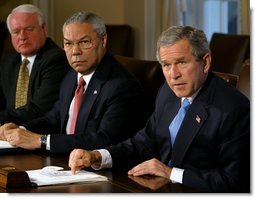 I'll be glad to answer some questions. Ron.

Q Sir, is bin Laden alive? And whether or not he is, does the recording signal the potential for an imminent terrorist attack?

THE PRESIDENT: We are looking at this latest tape. Our experts are analyzing the voice content. And we'll let them speak about whether it's him or not. Nevertheless, the contents of the tape, the message is a serious message. And it reminds -- should remind all of America, and remind our friends and allies, that there is an active enemy that continues to hate, is willing to use murder as a way to achieve their goals.

Whoever put this tape out has put the world on notice yet again that we're at war, and that we need to take these messages very seriously, and we will. We'll take them seriously here at home by working with the appropriate authorities to deal with threats. And we'll take them seriously abroad by continuing our hunt. We'll chase these people down, one at a time. It doesn't matter how long it takes, we'll find them and bring them to justice.

Q Shouldn't we have found him sooner though, looking back on Tora Bora?

THE PRESIDENT: We're making great progress in the war on terror. Slowly, but surely, we are dismantling the terrorist network. We're finding their sanctuaries, we're holding people to account. Our coalition of freedom-loving nations is up to 90 now. There is an international manhunt on. I warn the American people that this is going to take time to achieve our objective. We're in a different kind of war. It's a war that requires international cooperation. We've got to cut off their money, we've got to share intelligence. And we're on a manhunt. And we're not quitting. Slowly but surely, we're achieving our objective.

Q Sir, what happens on Friday if Iraq fails to say it will comply? Do you go back to the U.N. or immediately move into a military posture?

THE PRESIDENT: I have told the United Nations we'll be glad to consult with them. But the resolution does not prevent us from doing what needs to be done, which is to hold Saddam Hussein into account. We hope that he disarms. We hope that he will listen to the world. The world has spoken. A diverse group of nations in the Security Council spoke with one voice. The United States Congress spoke with one voice.

And so are the days of deceit and denial. And now it's up to him. And I want to remind you all that inspectors are there to determine whether or not Saddam Hussein is willing to disarm. It's his choice to make. And should he choose not to disarm, we will disarm him.

Q Mr. President, following on that, could you give us in as plain words as possible what you believe will constitute a material breach of his obligations?

THE PRESIDENT: Zero tolerance. About as plain as I can make it. We will not tolerate any deception, denial or deceit, period.

THE PRESIDENT: You're looking great. (Laughter.)

Q Why thank you, so are you. (Laughter.)

THE PRESIDENT: You don't qualify. (Laughter.)

Q Sir, Alan Greenspan said today that the economy has hit a soft patch. He also said that households have become more cautious in their purchases while business spending is not showing substantial vigor. What do you plan to do about this? Do you think this is an indictment of your tax cut, or do you take this as a call that a new round of such tax relief is necessary?

THE PRESIDENT: I think that, first of all, I appreciate the wisdom of Chairman Greenspan. He uses the word, soft spot. I use the words, bumping along. Both of us understand that our economy is not nearly as strong as it's going to be. And our job here in Washington is to create the environment necessary for people to feel confident about risking capital, and to create an environment amongst our consumers where they're confident about the future.

And one way that we have addressed this problem up to now is to insist that Congress allow people to keep more of their own money. And it seemed to have worked well during the first three quarters of this year. And to the extent that we need to continue doing that, I'm willing to listen to ideas. And I want to work with Congress. I sent a signal to Congress that I believe that we need to have further discussions how to best stimulate the economy. And I'm very serious about that.

And so when the Congress comes back from the -- when the new Congress comes back, we will have some ideas to discuss with them. We've always -- in Washington, we've got to be constantly on alert about people not being able to find jobs. And we've got to be working together to put the environment in place so they can find jobs. Like the Chairman, I am not satisfied with the economic growth of the country. Like the chairman, I am worried when people can't find work.

Q But what about the deficit though, in this context?