For Immediate Release
Office of the Press Secretary
March 11, 2002

THE PRESIDENT: Diplomatic representatives of the coalition of nations; members of the Congress, the Cabinet, the Supreme Court; members of the American Armed Forces; military coalition members from around the world; distinguished guests; and ladies and gentlemen. Welcome to the White House. 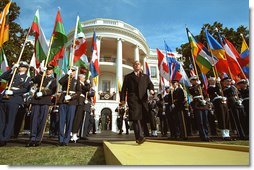 We have come together to mark a terrible day, to reaffirm a just and vital cause, and to thank the many nations that share our resolve and will share our common victory.

Six months separate us from September the 11th. Yet, for the families of the lost, each day brings new pain; each day requires new courage. Your grace and strength have been an example to our nation. America will not forget the lives that were taken, and the justice their death requires.

We face an enemy of ruthless ambition, unconstrained by law or morality. The terrorists despise other religions and have defiled their own. And they are determined to expand the scale and scope of their murder. The terror that targeted New York and Washington could next strike any center of civilization. Against such an enemy, there is no immunity, and there can be no neutrality.

Many nations and many families have lived in the shadows of terrorism for decades -- enduring years of mindless and merciless killing. September the 11th was not the beginning of global terror, but it was the beginning of the world's concerted response. History will know that day not only as a day of tragedy, but as a day of decision -- when the civilized world was stirred to anger and to action. And the terrorists will remember September 11th as the day their reckoning began.

A mighty coalition of civilized nations is now defending our common security. Terrorist assets have been frozen. Terrorist front groups have been exposed. A terrorist regime has been toppled from power. Terrorist plots have been unraveled, from Spain to Singapore. And thousands of terrorists have been brought to justice, are in prison, or are running in fear of their lives.

With us today are representatives from many of our partners in this great work, and we're proud to display their flags at the White House this morning. From the contributions these nations have made -- some well known, others not -- I am honored to extend the deepest gratitude of the people of the United States.

The power and vitality of our coalition have been proven in Afghanistan. More than half of the forces now assisting the heroic Afghan fighters, or providing security in Kabul, are from countries other than the United States. There are many examples of commitment: our good ally, France, has deployed nearly one-fourth of its navy to support Operation Enduring Freedom, and Great Britain has sent its largest naval task force in 20 years. British and American special operations forces have fought beside teams from Australia, and Canada, Norway, Denmark and Germany. In total, 17 nations have forces deployed in the region. And we could not have done our work without critical support from countries, particularly like Pakistan and Uzbekistan.

Japanese destroyers are refueling coalition ships in the Indian Ocean. The Turkish air force has refueled American planes. Afghans are receiving treatment in hospitals built by Russians, Jordanians, Spanish, and have received supplies and help from South Korea.

Nations in our coalition have shared in the responsibilities and sacrifices of our cause. On the day before September the 11th, I met with Prime Minister John Howard of Australia, who spoke of the common beliefs and shared affection of our two countries. We could not have known that bond was about to be proven again in war, and we could not have known its human cost. Last month, Sergeant Andrew Russell of the Australian Special Air Service, died in Afghanistan. He left behind his wife, Kylie, and their daughter, Leisa, just 11 days old. Friends said of Sergeant Russell, "You could rely on him never to let you down."

This young man, and many like him, have not let us down. Each life taken from us is a terrible loss. We have lost young people from Germany, and Denmark, and Afghanistan, and America. We mourn each one. And for their bravery in a noble cause, we honor them.

Part of that cause was to liberate the Afghan people from terrorist occupation, and we did so. Next week, the schools reopen in Afghanistan. They will be open to all -- and many young girls will go to school for the first time in their young lives. (Applause.) Afghanistan has many difficult challenges ahead -- and, yet, we've averted mass starvation, begun clearing mine fields, rebuilding roads and improving health care. In Kabul, a friendly government is now an essential member of the coalition against terror.

Now that the Taliban are gone and al Qaeda has lost its home base for terrorism, we have entered the second stage of the war on terror -- a sustained campaign to deny sanctuary to terrorists who would threaten our citizens from anywhere in the world.

In Afghanistan, hundreds of trained killers are now dead. Many have been captured. Others are still on the run, hoping to strike again. These terrorist fighters are the most committed, the most dangerous, and the least likely to surrender. They are trying to regroup, and we'll stop them. For five months in Afghanistan, our coalition has been patient and relentless. And more patience and more courage will be required. We're fighting a fierce battle in the Shah-i-kot Mountains, and we're winning. Yet, it will not be the last battle in Afghanistan. And there will be other battles beyond that nation.

For terrorists fleeing Afghanistan -- for any terrorist looking for a base of operations, there must be no refuge, no safe haven. (Applause.) By driving terrorists from place to place, we disrupt the planning and training for further attacks on America and the civilized world. Every terrorist must be made to live as an international fugitive, with no place to settle or organize, no place to hide, no governments to hide behind, and not even a safe place to sleep.

I have set a clear policy in the second stage of the war on terror: America encourages and expects governments everywhere to help remove the terrorist parasites that threaten their own countries and peace of the world. (Applause.) If governments need training, or resources to meet this commitment, America will help.

We are helping right now in the Philippines, where terrorists with links to al Qaeda are trying to seize the southern part of the country to establish a militant regime. They are oppressing local peoples, and have kidnapped both American and Filipino citizens. America has sent more than 500 troops to train Philippine forces. We stand with President Arroyo, who is courageously opposing the threat of terror.

In the Republic of Georgia, terrorists working closely with al Qaeda operate in the Pankisi Gorge near the Russian border. At President Shevardnadze's request, the United States is planning to send up to 150 military trainers to prepare Georgian soldiers to reestablish control in this lawless region. This temporary assistance serves the interests of both our countries.

In Yemen, we are working to avert the possibility of another Afghanistan. Many al Qaeda recruits come from near the Yemen-Saudi Arabian border, and al Qaeda may try to reconstitute itself in remote corners of that region. President Saleh has assured me that he is committed to confronting this danger. We will help Yemeni forces with both training and equipment to prevent that land from becoming a haven for terrorists.

In the current stage of the war, our coalition is opposing not a nation, but a network. Victory will come over time, as that network is patiently and steadily dismantled. This will require international cooperation on a number of fronts: diplomatic, financial and military. We will not send American troops to every battle, but America will actively prepare other nations for the battles ahead. This mission will end when the work is finished -- when terror networks of global reach have been defeated. The havens and training camps of terror are a threat to our lives and to our way of life, and they will be destroyed. (Applause.)

At the same time, every nation in our coalition must take seriously the growing threat of terror on a catastrophic scale -- terror armed with biological, chemical, or nuclear weapons. America is now consulting with friends and allies about this greatest of dangers, and we're determined to confront it.

Here is what we already know: some states that sponsor terror are seeking or already possess weapons of mass destruction; terrorist groups are hungry for these weapons, and would use them without a hint of conscience. And we know that these weapons, in the hands of terrorists, would unleash blackmail and genocide and chaos.

These facts cannot be denied, and must be confronted. In preventing the spread of weapons of mass destruction, there is no margin for error, and no chance to learn from mistakes. Our coalition must act deliberately, but inaction is not an option. (Applause.) Men with no respect for life must never be allowed to control the ultimate instruments of death. (Applause.)

Gathered here today, we are six months along -- a short time in a long struggle. And our war on terror will be judged by its finish, not by its start. More dangers and sacrifices lie ahead. Yet, America is prepared. Our resolve has only grown, because we remember. We remember the horror and heroism of that morning -- the death of children on a field trip, the resistance of passengers on a doomed airplane, the courage of rescuers who died with strangers they were trying to save. And we remember the video images of terrorists who laughed at our loss.

Every civilized nation has a part in this struggle, because every civilized nation has a stake in its outcome. There can be no peace in a world where differences and grievances become an excuse to target the innocent for murder. In fighting terror, we fight for the conditions that will make lasting peace possible. We fight for lawful change against chaotic violence, for human choice against coercion and cruelty, and for the dignity and goodness of every life.

Every nation should know that, for America, the war on terror is not just a policy, it's a pledge. I will not relent in this struggle for the freedom and security of my country and the civilized world. (Applause.)

And we'll succeed. (Applause.) There will be a day when the organized threat against America, our friends and allies is broken. And when the terrorists are disrupted and scattered and discredited, many old conflicts will appear in a new light -- without the constant fear and cycle of bitterness that terrorists spread with their violence. We will see then that the old and serious disputes can be settled within the bounds of reason, and goodwill, and mutual security. I see a peaceful world beyond the war on terror, and with courage and unity, we are building that world together.

Any nation that makes an unequivocal commitment against terror can join this cause. Every nation of goodwill is welcome. And, together, we will face the peril of our moment, and seize the promise of our times.

May God bless our coalition. (Applause.)