For Immediate Release
Office of the Press Secretary
February 25, 2002 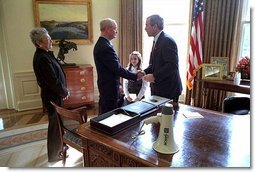 THE PRESIDENT:  Listen, I want to -- I want to welcome Bob Beckwith to the Oval Office, and his wife, Barbara, and his two grandchildren and son and daughter who are here, and son-in-law.

As you may remember, I met Bob on the heap of a burnt-out fire engine in New York.  And he didn't know and I didn't know that we were going to meet on that day, and I had -- I was traveling there with George Pataki and Rudy Giuliani and it was my chance, after the National Prayer Service, to go to New York City and tell the good people of that town, that city, how the nation stood with them.  I had a chance to go and see the fire fighters and the police officers who had been giving every ounce of their energy to rescue their fellow citizens.

And I was given a bullhorn.  And it turned out to be one of those moments where I had a chance to speak to the world on behalf of the citizens of New York.  And Bob was standing there by my side.

I told Bob when he came in, you made me famous that day.  But I want to thank you, Bob, for coming back.  And I want to thank Colonel Wiese as well, who rescued the bullhorn -- and will let me keep the bullhorn for the library. There's a father-and-son exhibit that's going to go on at the Bush Library, Bush 41 Library, at Texas A&M, and this will be one of the key parts of the exhibit. It's an historic, really an historic memento.  Something we didn't choose, but it's one of those days that I'll never forget, and I want to thank you.

THE PRESIDENT:  It was an amazing experience.  You know, I didn't realize at the time that you and I walked up on the heap of a burnt-out fire engine.  I didn't realize that.  And what's interesting, as a result of that, some people in Louisiana saw us standing on the fire engine and went and raised money for a new fire engine for New York.  So that event had a lot of interesting ramifications.

GOVERNOR PATAKI:  Mr. President, since September 11th, you've provided incredible leadership and really inspired the country.  There are many unforgettable moments.  But one that Bob and I and his family and much of America will never forget is three days after that attack when you came to Ground Zero.  And it was exactly the right time.

As Bob can say, everybody was exhausted and worn out and you didn't come for a photo op; you spent hours touring the site and shaking hands with the fire fighters and the construction workers.  And I'll never forget the moment when you and Bob stood on that wreck and the President was talking and one of the construction workers yelled out, "we can't hear you."  And the President said, well, I can hear you; the whole world hears you.  And pretty soon those evildoers will be hearing from us.

And, Mr. President, they have heard from us, and your leadership has been inspiring.  And this is what you said those words with and I'm proud to present it to you for the Presidential library.  Americans will never forget.

THE PRESIDENT:  Thank you.

Q    Mr. President, are you satisfied with Pakistan's response in the Daniel Pearl case?  And is the United States interested in pursuing or indicting the primary suspect that's now in custody there?

THE PRESIDENT:  I am satisfied with the response of President Musharraf and the Pakistani government.  I got a phone call from him when I was flying back from China, and I could tell from the tone of his voice how distraught he was, how disturbed he was that this barbaric act had taken place in his country.  He knew full well that those killers did not represent the vast, vast majority of the people in his own country.  And he vowed to me on the phone that he would do everything in his power to chase down the killers and bring them to justice.

And, yes, we're always interested in dealing with people who have harmed American citizens.

Q    Mr. President, what are your thoughts on an economic stimulus package now?  Do you think there's really an opportunity to work with the Democrats in the Senate, particularly given signs that, albeit slowly, the economy is beginning to reverse?

THE PRESIDENT:  Well, I've got to tell you something, it's a matter of will and desire.  If people put their mind to something, we can get things done in Washington, D.C.  I think we need an economic stimulus package.  I think it's important for our economy.  I think any time people are not working who need to be working, who want to work, we've got to do everything we can to make sure the environment is such that they can work.

Secondly, I'm going to talk to the governors today and remind them that in the economic stimulus package was some emergency Medicaid money, as well as the national emergency grants.  Because it's, what, emergency grant money to help Medicaid bills, as well as grants for emergency situations, to help people with their health care bills.

And, yes, I think we need that bill.  And I hope the Senate will take it up and pass it.

Q    Sir, have you told Secretary Rumsfeld to get rid of the Office of Disinformation that he's talking about?

THE PRESIDENT:  I told Secretary Rumsfeld -- I didn't even need to tell him this; he knows how I feel, I saw it reflected in his comments the other day -- that we'll tell the American people the truth.  And he was just as amazed as I was about reading, you know, some allegation that somehow our government would never tell the American people the truth.  And I don't -- I've got confidence, having heard his statement, I heard him this morning talk about it, that he'll handle this in the right way.

Q    There was a report over the weekend, Mr. President, that questioned the administration's commitment to the EPA Superfund.  Are you committed to fully funding the Superfund, sir?

THE PRESIDENT:  I'm committed to cleaning up the environment without enriching lawyers.

THE PRESIDENT:  I think there's too much litigation when it comes to environmental cleanup.  What I want is action and results.  And so we're looking at ways to make sure the Superfund fulfills its mission.  And you cannot sue your way to clean air and clean water and clean land.  It's got to be a system that focuses on efficient, good ways to make sure we accomplish the mission. And I think -- so, yes, we're looking at ways to reform the system to make sure it works, make sure it actually accomplishes what the Congress wants it to accomplish.

One of these days, this little lady right here is going to be driving an automobile with a hybrid engine in it, and a fuel cell in it.  And it's going to work.  And I hope I'm around to see it, too.

Q    We thought the bullhorn had been lost.  How were you able to find it?

THE PRESIDENT:  The colonel found it; it's the actual one, too.