For Immediate Release
Office of the Press Secretary
May 30, 2001

Listen to the President's Remarks

THE PRESIDENT: Thank you all very much. Gale, thank you very much. You're going to like working for Gale. She's a common-sense person who cares deeply about our national park system, and about our nation's environment. I picked a fine, fine person to lead this very important agency. And, Madam Secretary, thank you for traveling with me today. 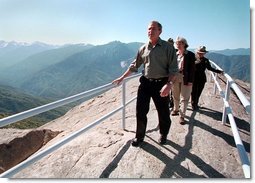 Dick, thank you very much for your fine hospitality. It's a fantastic trip up to Moro Rock. I'm a survivor of the march up to Moro -- (laughter) -- led by Debbie Byrd, chief ranger. What a fantastic hike it was. It's a spectacular place. And it must be a joyous place to work. And for all of you who work on behalf of the people of the United States in the Park Service, I thank you very much for your service. (Applause.)

I'm so very pleased that three members of the United States Congress are here, three really fine public servants -- Cal Dooley, Gary Condit, and George Radanovich. Thank you all so much for coming. (Applause.)

Any day that you can take in sights like these is a great day. It has been a great day for me. This place leaves each of us with a feeling of incredible humility. That's one reason why it's so important. In our daily lives we're surrounded by things of our own making -- buildings and machines and goods we create ourselves. There's much to admire and appreciate in the works of man. But come here and you're reminded of a design that is not our own. Here we find a grandeur beyond our power to equal.

And, fortunately, more than a century ago, the government of the United States stayed the hand of all who would destroy this place and these trees. That decision, by President Benjamin Harrison, reflects an ethic of respect for the natural world that was once shared only by a few, but is now a basic commitment of American life.

Our duty is to use the land well, and sometimes, not to use it at all. This is our responsibility as citizens; but, more than that, it is our calling as stewards of the Earth. Good stewardship of the environment is not just a personal responsibility, it is a public value. Americans are united in the belief that we must preserve our natural heritage and safeguard the land around us.

This belief is affirmed in our laws. With more than 80 million acres under protection, our national park system has set the standard for the world in preserving natural lands. We've given a reprieve to our national symbol, the bald eagle. Through cooperative efforts with wildlife biologists and private landowners, the condors are back in the wilds of California. Americans have come to understand that other creatures need the room to roam and places to live.

Other laws express this same commitment. Our lakes and rivers are much cleaner than they were 30 years ago. Firm limits on toxic emissions have greatly improved the quality of the air we breathe. And I'm proud that it was my dad's signature on the Clean Air Act amendments of 1990 that helped reduce acid rain and urban air pollutions.

Over the last three decades, nearly 3,000 hazardous waste facilities have been closed. We've made much progress in ridding our towns and cities of brownfields, and even more progress will be made over the next several years. And the Environmental Protection Agency has begun or completed cleanups in more than 90 percent of the sites targeted under Superfund.

This marks tremendous progress in protecting our nation's environment. It's not the doing of a single party or the branch of government, or a state or a community or a group, it's been the work of Presidents and Congresses and governors, as well as landowners, environmentalists and local leaders. All have responded to the appeal of conscience and the clear wishes of the American people.

Today, I continue to speak about my conservation policies and the principles that will guide them. These policies reflect the vital role we each play as stewards of our lands, and the federal government's part as steward of nearly one-third of the American landmass. And they reflect that while we've made great progress, much more must be done to protect the environment.

In spite of the successes of the past 30 years, at times we've seen needless conflict and policies that have done more harm than good. Today we must seek the best ways to achieve the common goal of leading to posterity a nation of fresh air, clean water, and natural beauty. These policies arise from the conviction that a healthy environment is national concern and requires an active national government.

At the same time, states and localities have their own responsibilities for the environment. They have their own authority, too. And usually they have a better grasp of the problem and what is needed to solve it. Washington has sometimes relied too much on threat and mandate from afar, when it should be encouraging innovation and high standards from the people closest to the land.

My administration will adopt a new spirit of respect and cooperation, because, in the end, that is the better way to protect the environment we all share -- a new environmentalism for the 21st century. Citizens and private groups play a crucial role. Just as we share an ethic of stewardship, we must share in the work of stewardship. Our challenge is to work in partnership. We must protect the claims of nature while also protecting the legal rights of property owners. We will succeed not by antagonizing one another, but by inviting all to play a part in the solutions we seek.

For the federal government, good stewardship begins right here, in this and in the hundreds of other park areas across America. Washington has a very clear and direct responsibility for these lands. Yet many parks have gone years without receiving the kind of care and upkeep the American people expect. More than 287 million people now visit our national parks each year.

At the same time, however, many of our parks have gone neglected. So, today I'm announcing the National Parks Legacy Project. My administration will make a major investment in our national parks to preserve the legacy of protection for future generations. We will spend $5 billion over 5 years to clean up the backlog in maintenance, and make our parks more inviting and acceptable to all citizens.

This park is a model to follow. The Park Service is nearing completion of a project to remove structures once thought necessary, but which now threaten to damage the roots of the sequoias. In my budget, I propose spending $1.5 billion to help complete this project. Working with the local community and the Sequoia Natural History Association, we will offer the young and old alike an opportunity to learn more about the wonders of nature.

In all our parks, we want visitors to feel welcome and to enjoy the experiences that nature and history have to offer. Future renovations will make this more possible by adding, for example, many more miles of carefully-drawn hiking paths. Here again, Sequoia is a model, allowing for more visitors without destroying the very things that draw people here -- the scenery, the quiet, the animals left unharmed in their natural habitat. And we will leave them that way.

Our parklands are home to thousands of species of flora and fauna. And as stewards of these lands, the federal government has the responsibility to protect and nurture them in their habitats and enhance the science that helps to protect biodiversity. For the next five years, we'll protect nearly 4,000 miles of river, and restore nearly 9,000 acres of parklands to their natural conditions. We have more than doubled the budget to help us better study our parks' natural resources, learn better ways to protect and restore them, and teach visitors about how they can help.

My administration will also pass new rules to help remove haze in many of America's national parks. Our national parks are for all to visit, and all Americans to enjoy. And we will continue our work to make these national treasures accessible to those with disabilities and to welcome people of all backgrounds. And to make sure that we're achieving our goals in these areas, I'm asking our park rangers to prepare stewardship plans for each park in America.

I'll also direct Secretary Norton to prepare an annual report, describing the condition of our parks, with recommendations of ways to improve them.

Some fear that places like this are scenes from a passing world; they're not. They will be here as long as we're willing to show careful regard for the environment. This is a great responsibility. I strongly believe our country is equal to it.

America, itself, is just 225 years old -- a momentous era, and yet so short a time in the life of the world. We cannot see into the centuries ahead, but we can be sure, in a place like this, that we're in the presence of enduring things. And it will be to our lasting credit if these works of God are still standing a thousand years from now. Thank you for having me. (Applause.)