For Immediate Release
Office of the First Lady
March 20, 2001

Welcome to the White House. I am thrilled that such distinguished leaders have joined us here today in the East Room.

This room has seen many changes over the years. Mrs. Abigail Adams’ staff used to hang the family laundry out to dry in this room. Of course there weren’t any paned windows in here 200 years ago, so fresh air was abundant. I am thankful that times have changed. 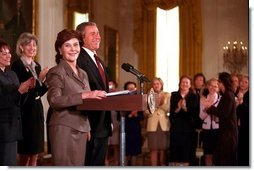 I’m especially proud that you could join us as our nation celebrates Women’s History Month. Battles hard-fought and won by women resulted in improvements in all aspects of American life. You are proof of it.

Mrs. Adams, by the way, cautioned her husband as he wrote the Constitution of our country to not forget the women.

Our daughters find it hard to believe that just over 75 years ago, women didn’t even have the right to vote. I’ll never forget a day in Austin when I joined Texas women in celebrating the 75th anniversary of Women’s Suffrage.

We were on the steps of the Texas State Capitol building. My mother was there, and Liz Carpenter was there. Both were babies when women won the right to vote.

My daughters were also there, much to their chagrin. They represented the present and the future — those who reaped the full benefit of women’s struggle for increased inclusion in American life.

Everyone was dressed in historically appropriate white outfits with yellow sashes. Everyone except my teen-age daughters, who would have rather been anywhere else but on stage with us.

In a great show of unity and pride, my mother, Liz Carptenter, and I all joined hands to shout "Hip Hip Hooray for Women’s Suffrage!" As we did, I reached out with my free hand and found vacant space where my daughters were supposed to be standing.

I looked over, and there they sat — totally humiliated and trying to shrink into their seats. You know teen-agers. They were mortified by the public spectacle we had made of ourselves.

For our girls, women’s suffrage is ancient history. They have never known the inequalities that women had to endure and overcome two generations ago.

That’s why it’s so important to be vigilant in our remembrance and vocal in our celebration of Women’s History Month. We owe the great women in our past for the opportunities we enjoy today.

And now I am proud to introduce the father of those girls, who raised them to believe that every option is open to them. In fact, he is devoted to making the future brighter for all Americans.

Ladies, I am proud to introduce to you my husband, the President of the United States, George W. Bush.