For Immediate Release
Office of the Press Secretary
January 26, 2001 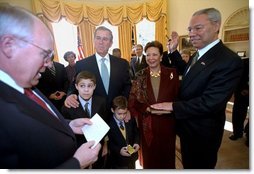 As I said in my inaugural address, America remains involved in the world, by history and by choice, shaping a balance of power that favors freedom.  To achieve this goal, we need a foreign policy that serves America's vital interests and speaks for our highest ideals; a foreign policy that is clear and consistent and confident, true to our values, and true to our friends.

I know of no better person to be the face and voice of America diplomacy than Colin Powell.  His dignity and integrity will add to the strength and authority of America around the world.

SECRETARY POWELL:  Thank you, Mr. President.  Thank you very much.

Mr. President and Mr. Vice President, I once again thank you for the honor of my service once again to the nation, in this case as the 65th Secretary of State of the United States of America.  I'm deeply touched by the confidence you have placed in me, and I promise that I will do my very best to carry your message of freedom throughout the world, to commit the men and women of the State Department to that message so that we can show by our value system, by what we believe in, what the world can be for all those in the world who still suffer from oppression, who are still suffering from totalitarian regimes.

I think we have enormous opportunities ahead of us.  There will also be challenges and there will also be dangers.  But I look forward to playing my part, Mr. President, as you structure the foreign policy of the American people and take that foreign policy to the world -- a world that I think is on a new road to democracy, to freedom, and to allowing every man and woman in the world to pursue their individual destinies, if given the chance at freedom and democracy.

And, Mr. President, Mr. Vice President, I promise that I will give you everything I have in this new job I assume.  Thank you, sir.

THE PRESIDENT:  Thank you, sir.

SECRETARY POWELL:  In due time.